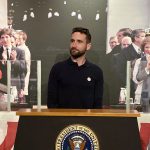 When the World is Watching: Race and Identity at the 1984 Los Angeles Olympics

My project tells the story of what happened to Angelenos when the world’s biggest sporting event came to town. More broadly, the project looks at the Games as a site of neoliberal cultural production, one in which new ideas about national and racial identity were contested and forged.

The Uses and Abuses of the American Past, HOTCUS PGR & ECR Conference, University of Nottingham, October 2018.
http://www.baas.ac.uk/usso/review-hotcus-pg-ecr-conference-2018/

Centre for American and Canadian Studies, University of Birmingham.

History in Theory and Practice.