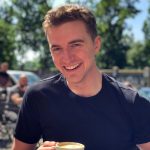 My research centres predominantly on the life and writings of John Milton (1608-1674). My AHRC-funded PhD thesis, Milton’s Hellenism (due for submission in June 2023), comprehensively re-evaluates Milton’s intensive and creative engagement with Greek texts and scholarship throughout his poetic and political career. Milton’s Hellenism enhances our understanding of Milton’s reading of Greek literature, ranging from Homeric and Hellenistic epics through to Byzantine and Early Modern Greek texts.

During the placement, I examined archives at a large number of public schools, universities and research libraries around the UK (including Shrewsbury School, Winchester College, Eton College, and Balliol College, Oxford. I  shared my research findings online in the form of tweets and blog posts and I have presented my findings at presentations at Rugby School. I shared archival findings on the Schools of Empire Twitter account and my work was also shared by Dr Timothy Guard and Dr Thomas Smith at the Rugby Schools Meeting at Charterhouse in March 2023 to share the results of my research.

The lecture that I delivered to staff and students at Rugby School on 25th March 2022, 'Imperium: Classics, Empire and Colonialism in Public Schools, 1700-1900', will form the paper that I will ultimately deliver at the 3-day conference, hosted at Rugby School, in 2024 on 'Schools of Empire'. I have written a blog post concerning one particularly intriguing archival find - a Rugby pupil's Latin theme from 29th September 1789 expressing strong, abolitionist views (British Library, Add. MS 34595) - which is on the Schools of Empire website.

Member of the British Milton Seminar

Member of the Milton Society of America

Member of the Modern Language Association

Member of the Renaissance Society of America

Member of the Society for the Promotion of Hellenic Studies

Member of the Executive Committee of the Society for Neo-Latin Studies (SNLS).

Member of the Somerville Teachers' Network.

Tomos gained his BA in English from the University of Bristol in 2015 where he was the recipient of several departmental prizes, including the Roy Littlewood Prize for Best Dissertation, the Savage Prize for Best Final Year Performance, and the Moira Megaw Prize for Best Overall Performance. He also spent the second year of his undergraduate studies as an Erasmus student at the Université Paris-Sorbonne from 2013-14.

After graduating from Bristol, Tomos then gained his M.St. in English at Somerville College, University of Oxford, where he wrote a dissertation on John Milton's Paradise Regain'd under the supervision of Dr Margaret Kean. Following Oxford, Tomos worked as an English Teacher at Tonbridge School in Kent (2016-17) and then at Godolphin & Latymer School in Hammersmith (2017-19). While working full-time in London and undertaking a PGCE in Secondary Education, Tomos also gained a MA in Classics from Birkbeck, University of London, which was fully funded by the Eric Hobsbawm Postgraduate Scholarship.

I have been in receipt of numerous awards of additional funding from the AHRC for research trips, conferences, language training and professional development. In addition to my AHRC studentship, I have also been awarded by the AHRC:

£2,031.11 covering travel and accommodation costs for archival research in Italy (Rome, Florence, and Parma) from January to March 2023.

£2,203.00 covering travel, accommodation, and conference fees for research in the United States from 11th June to 25th July. Through this award, I was able to undertake archival research at the Rare Books & Manuscripts Library at the University of Illinois at Urbana-Champaign; attend and present at the John Milton Conference at Saint Louis University, Missouri; and undertake research at the Newberry Library in Chicago.

£1,714.47 to attend the University of the West-Indies and University of Leicester PhD/ECR Summer School on 'Cultures and Politics of Protest' at the Moma Campus in Kingston, Jamaica (21 May – 6 June 2022).

£168.90 for accommodation and travel costs for a research trip to the University of Cambridge (1-3 November 2021).

£532.76 covering travel, accommodation, and conference fees for the Renaissance Society of America Conference in Dublin (29th March to 2nd April 2022).

£987.73 for travel, accommodation, and conference fees for the International Association of Neo-Latin Studies (IANLS) Conference at Leuven, Belgium 29 July - 6 August 2022)

£486 to undertake the PRINCE2 Project Management Qualification. I completed the course in late-November 2021, then I sat and passed the exam on 5th January 2022.

3-month stipend extension (plus access to up to £1,400 in additional research costs) to undertake a doctoral internship with the AHRC-funded research project, Schools of Empire: Class and Colonialism, funded by Rugby School and the AHRC.

Beyond the AHRC, I have also been the recipient of the following sources of funding for my postgraduate research:

£7,950 from the Eric Hobsbawm Postgraduate Scholarship at Birkbeck, University of London. I was a Hobsbawm Scholar at Birkbeck from 2017-19 to undertake a part-time MA in Classics at Birkbeck's Department of History, Classics, and Archaeology. This Scholarship served as a full-fee waiver and was established in memory of one of the greatest historians of the last century in order to encourage the next generation of scholars in the Humanities to pursue original, high-quality and exciting research by assisting financially with study and research costs.

€1,200 for a one-month Research Fellowship at the Ludwig Boltzmann Institute for Neo-Latin Studies, Innsbruck. From 18th April to 20th May 2022, I was based at the LBI where I focused on research for a thesis chapter titled 'Milton's Cambridge Greek'.

£856.58 from the Postgraduate Research Support Fund of the University of Birmingham's College of Arts and Law to cover travel and accomodation in order to attend the Thirteenth International Milton Symposium at the University of Toronto, 10-14 July 2023.

£125 from The British Society for Literature & Science (BSLS) Postgraduate and Early Career Conference Fund to cover the registration fee for the Thirteenth International Milton Symposium at the University of Toronto, 10-14 July 2023.

Travel and accommodation costs to attend the workshop 'Latin-Greek Code-Switching in Early Modernity' on 13-14 October 2022 covered by Ghent University's Scientific Research Network "Literatures without Borders: A Historical-Comparative Study of Premodern Literary Transnationality" and the Ludwig Boltzmann Institute for Neo-Latin Studies.

Postgraudate Representative of the Society for Neo-Latin Studies

Since November 2020, I have been the Postgraduate Representative of the SNLS. In this role, I have organised events that are designed to benefit doctoral researchers in the field of Neo-Latin Studies, as well as Early Career researchers. Two large, online events I organised were:

From March to June 2021, I was a Research Assistant at the University of Birmingham's Centre for Literary Editing and Material Texts. I expanded CLEMT's social media presence and I attended weekly meetings with the Research Centre's co-directors, Dr Oliver Hertford and Dr Louise Curran, in which we organised future events. For example, I organised the event, hosted by the University of Birmingham, 'Work (Not) in Progress: Archival Research During the Pandemic (13 March 2021). Participants included Professor Hugh Adlington, Dr Emma West, Dr Hannah Yip, Dr Thomas Clifton, and myself.

Induction Certificate (completion of necessary training and qualifications for the profession of school teacher in England) gained in 2019.