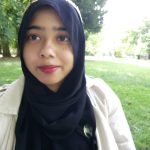 My thesis will consist of a 60,000-word Young Adult (YA) fantasy novel with an accompanying 20,000-word reflective commentary. My novel will explore how a female storyteller, Huria, becomes a villain. I will investigate the role of female storytellers in Arabic epics and examine how and why they use fantasy to articulate their experiences. I want to reclaim and reinvent female heroism inherited from traditional Arabic epics in a Young Adult fantasy novel as an Islamic model of female empowerment.

My creative piece is about a female storyteller, Huria. In 1950s Halqa, a fictional city in Morocco, everyone has a little magic. But Huria has the power to bring stories to life. Her power is so strong that its coveted. At the beginning of the story, Huria is framed as the villain of someone else’s story. She escapes from her execution and tries to solve the mystery of how she became the villain.

In my critical reflection, I will examine the role of the female storyteller under an Islamic feminist lens to consider whether stories about female characters atypical of heroism (warriors) can be used to inspire and empower Muslim women depending on the interpretation attributed to their characters. I will focus on two characters: Scheherazade from A Thousand and One Nights and Qamariyya from The Adventures of Sayf Ben Dhi Yazan. I will also examine how the female storyteller has already been depicted in YA fantasy literature, Renee Ahdieh’s The Wrath and the Dawn and Kristen Ciccarelli’s The Last Namsara. I will address the relationship between fantastic elements in Arabic epics and how and why fantasy, mythology and folklore can be reinvented in a YA fantasy novel.

The Storyteller explores how storytelling is a pharmakon, both poison and cure for Huria, the titular character. The story will be told through a dual narrative. Both past and present intertwine as Huria uncovers where she went wrong in her stories.

How can female storytellers from Arabic epics be reinvented in a Young Adult fantasy novel considering characterisation and narrative voice?

How and why do female storytellers use fantasy, mythology and folklore to articulate their experiences and how can this be demonstrated in my novel?

How can storytelling be a pharmakon, both poison and cure, and how and why have I demonstrated this in my novel?

Registrar for The Hidden in Performance, Virtual and Literary Culture 2021

Creative Showcase- Reading The Storyteller at The Research Festival