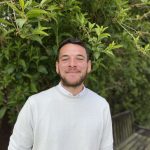 The Roman 'porticus': promenading from Republic to Empire.

My thesis explores the ways in which the people of ancient Rome navigated and thought about their city. Especially, it investigates the development of colonnaded spaces (porticus) during the constitutional transition from Republic to Empire (c. 200 BCE – 100 CE). At Rome, such colonnades constituted the architectural curtains for the urban experience, giving a certain scenography to the rhythms of daily spectacle. Exploring how this architectural framework developed chronologically, topographically and thematically, the thesis intends to shed light on the importance of these structures not only to daily life in ancient Rome but also to the development of urban settlements across time.

Aediles, porticus and the reorganisation of the mid-Republican city: the case of the Porta Trigemina - 'The topography of administration in ancient Rome', Rome, April 2020.

Framed worlds in the urbanscape: Towards a Goffmanian framework for exploring Roman porticoes - 'Frames and framing in antiquity', Changchun, China, March 2020.

Memory and Identity in the Cosmopolis - CRASIS 2019 Annual Meeting and Master Class, University of Groningen, March 2019.

The Templum Divi Claudii: reconstructing an elusive complex in its topographical environs - University of Nottingham, March 2019.

Rome’s ‘tour-guides’: towards the idea of collective viewing at Rome - 'Building Cohesion and Unity: combining approaches to the study of the past', University of Nottingham, 2nd December 2017.

Other Academic activities:
Placement @ The British School at Rome, 'Rome in print: archaeology and archives', September to December 2020 (https://tinyurl.com/BSRBlog).

The city of Rome: an introduction, keynote lecture at the Bedford Sixth Form, January 2020.