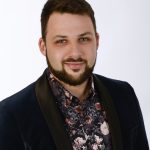 My project investigates the Roman mint of Tarsus, which was the provincial capital of Cilicia and a leading cultural and commercial hub in the Eastern Mediterranean. Tarsus’ Roman coin output was large and diverse (600+ types between 29 BC and AD 268), yet this important source for the region’s diverse culture, society, and economy remains virtually untapped.

The study of dies, styles, and flans is essential to formulating Tarsus’ coin production, evaluating the coins as source material, and to understanding the political, economic, and cultural history of Tarsus and the surrounding area. This project seeks to discover civic connections in an economic network comparable to modern regionalised currency. This will reveal the role of shared images in presenting identity in monetary systems like the Eurozone and its influence on local economies. Furthermore, it will illustrate the role of coinage as a tool to propagate civic and cultural diversity, and how this could be achieved in modern societies. This research will transform the discipline by identifying Tarsus’s pivotal role in a key area between the eastern and western Roman world, renewing knowledge on cultural diffusion, economy, and representation. It also enables studies outside of numismatics on trade, interconnectivity, and cultural exchange.

The British Institute at Ankara