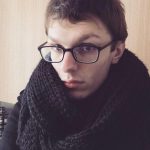 This PhD thesis examines how women and gay men are invited to watch contemporary slasher film and television texts in similar ways, identifying with characters and narratives in accordance to their cultural experiences. This suggests that spectatorship is not necessarily determined by gendered and sexual identity, as film theory assumes. Rather, spectatorship is influenced by the heteropatriarchal discourse that dictates the cultural experiences of women and gay men. Here, the thesis develops a conceptual framework that enhances the criticism of slasher cinema via feminist and queer theory, demonstrating how gay male audiences might identify with female characters.

‘Theory in the Flesh: The Babadook and New Realisations of the Monster Queer’ – Queer Fears: A One Day Symposium on New Queer Horror Film and Television, University of Hertfordshire (28 June 2019)

‘His Body, Himself: Mark Patton and the Performance of Heterosexuality in A Nightmare on Elm Street 2: Freddy’s Revenge (1985)’ – Cine-Excess XII: I Know What You Starred In Last Summer – Global Perspectives on Cult Performance, Birmingham City University (8-10 November 2018)