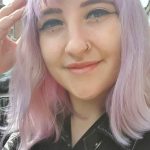 My research looks at apocalyptic exegesis and prophecy in late medieval England to understand how people thought about the end of the world. Apocalyptic exegesis and prophecy was often based on the Book of Revelation, where mystical beings and frightening events could often be interpreted allegorically to understand salvation and, according to some, predict the coming of the end. In particular, we find that the apocalyptic beasts, such as the seven-headed dragon, may be interpreted as a variety of figures or metaphorical meanings. Further, these mystical texts often adapted the Book of Revelation for a contemporary audience, where history mapped onto apocalyptic revelation, in order to reveal the anxieties and concerns of those living during this time.

For my thesis, I am looking at four different texts to build up a picture of the complexities of apocalyptic thought in late medieval England. Two of these, the Westminster Apocalypse and the Opus Arduum Valde, were exegetical texts on the Book of Revelation. These provided commentary on individual extracts from Revelation, but their divulging interests show a variety in the types of thought available in Late Medieval England. The second two texts are prophecies, the Columbinus Prophecy and the Apocalypse of Pseudo-Methodius, which built their own legends on the backs of apocalyptic thought. Here, the focus will be on how apocalyptic thought was adapted to suit contemporary audiences, and why these became popular particularly in England during the late medieval period.

'Political Malady in the English Columbinus Prophecy', International Congress of Medieval Studies, May 2021.

My other interests include:

Member of the History Lab at the Institute of Historical Research.