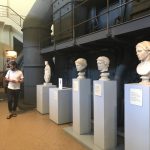 The Macabre in Marble: Michelangelo�s Knowledge of Surface Anatomy in its Wider Intellectual Contexts, 1493-1559

“Of all Michelangelo’s major activities, probably none has excited less enthusiasm […] than his study of anatomy.”

This statement, from David Summers’ Michelangelo and the Language of Art (1984), is still accurate today. Despite Michelangelo Buonarotti’s well-documented fascination with surface anatomy there is no substantial study of the artist’s involvement and knowledge of this field. This is, perhaps, due to the scarcity of primary source material that relates directly to Michelangelo’s anatomical knowledge – but what if, to find answers, we must expand the scope of investigation? There is an anachronistic tendency amongst scholars of Renaissance art and history to treat the period’s anatomical studies as the singular scientific discipline that it is today. To an extent this is reasonable, but in Michelangelo’s time the subject was substantially more multi-faceted.

I will approach Renaissance anatomy not as an autonomous pursuit but one that was born of a mindset that incorporated research into theology, philosophy and antiquity. The body – as it was understood by Michelangelo – was to be studied scientifically, not only as an empirical exploit but also to better comprehend the human form as the creation of God, the harbourer of the soul and the prime model for artistic achievement. These aspects were inseparable from one another but, with regard to this artist, they have not been approached as such. The timeframe that my thesis will examine ranges from the first known instance of Michelangelo practicing dissection in 1493 to the publication of Realdo Colombo’s De Re Anatomica in 1559 – a project which the artist had a mooted involvement in. My main questions, thus, will be: how did Michelangelo understand anatomy in this broader intellectual context? How did he consolidate these seemingly disparate areas in his art? And, more expansively, what can this tell us about how Renaissance intellects approached their scholarly endeavours?