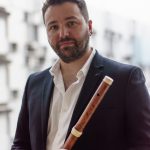 My PhD, in collaboration with Ex Cathedra, is based at the Royal Birmingham Conservatoire, and is an appraisal of Pietro Torri’s sacred choral works for the Court of Elector Maximilian II Emanuel in Munich.

Pietro Torri (c. 1650-1737) was one of the most important composers at the Munich court of the Elector Maximilian II Emanuel. Although war and political instability came to unsettle life at the Munich Court, causing Max Emanuel to relocate his court several times, musical life was always rich and vibrant, and earned the Court a significant reputation throughout Europe. Torri was one of Max Emanuel’s most significant and prized composers, and accompanied him each time he relocated the court. He was eventually appointed Hofkapell-Direktor, giving him significant influence over all aspects of court music.

Despite his significance at this important, well-respected European court, Torri’s music has been somewhat neglected in recent times. This study seeks to survey Torri’s sacred choral works written for Max Emanuel’s Court in an attempt to appraise his significance at the Munich Court and his musical impact more broadly. Through the creation of critical editions of several of Torri’s sacred choral works, and in collaboration with Ex Cathedra, this study will also address the performance conventions of such works, both in terms of the musical life at the Munich Court, and also more broadly to the period.