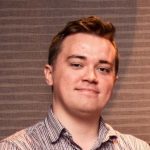 My thesis builds on the relatively few works focusing on Gothic theatre that have been published since Gothic studies emerged as a major field of study in the late twentieth century. But in recent years, critical attention to the Gothic stage has finally begun to accelerate, as scholars like Kelly Jones, Emma McEvoy and Madelon Hoedt have sought to illustrate its continued, vital relevance to contemporary society and culture in Britain and beyond.

In contribution to this broader undertaking, my project identifies political dramaturgy as a critical lens that can shed greater light on the inner mechanics and outer functions of Gothic drama in the twenty-first century, expanding present understandings of what constitutes a ‘Gothic’ experience in the theatre. I use Sarah Grochala’s framework for reading the ‘liquid dramaturgies’ (2017) of contemporary political playwriting, arguing that Gothic dramaturgies are more closely aligned with the ideologies, forms, aesthetics and affects of political theatre than is currently recognised. At the same time, where Gothic dramaturgies seem to fundamentally oppose the ‘hopeful’ imperatives of politically-engaged theatre (Angelaki, 2017), I argue that they do so not as surrender to the status quo, but to express a productive caution against a reactionary tendency to weaponise optimism–to insist that, having been identified, the social ills in question are now ‘in hand’ and require no further scrutiny. The project therefore explores how a selection of recent plays adopt Gothic dramaturgical strategies, emphasising ambivalence, disjunction and extremity, in order to make urgent that which is dismissed or depoliticised.

Research featured in the Westmere Images of Research 2019 Exhibition: 'Gothic Theatre Audiences', and a spectral photograph taken from the stalls in a 2019 production of William Peter Blatty's The Exorcist.

As well as Gothic Theatre, I enjoy studying literary and cinematic Gothic/Horror, particularly in relation to the Posthuman. More widely, I am interested in Practice-as-Research pedagogies, theatre-making in education, and the applications of theatre/live performance to social and cultural progress for the LGBTQIA+ communities.