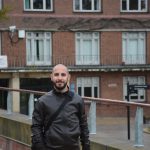 My research considers British merchants activities and investments in Ottoman Aleppo, Izmir, and Cyprus in the eighteenth century. It examines the ways in which British consuls, merchants, and their employs endeavoured to protect and further the British Empire’s interests.