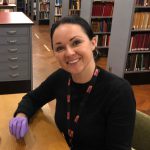 My project is the first scholarly research into the SBT’s international collections. It looks at objects, gifts, artwork, letters, and records related to Germany, the US, India/Pakistan/Bangladesh, and China in terms of how they respond to Shakespeare’s cultural capital and examines the nature of international diplomatic relationships that have been initiated through or with Shakespeare.

It asks how Shakespeare has been appropriated, what identities are being created/curated by the donor nation as well as by the SBT museum, and what role white supremacy, cultural imperialism, and soft power play in those formations.

It aims to constitute a new perspective on Shakespeare and nationalism, empire, race, and cultural diplomacy, and, by tracing the legacies of empire and white supremacy through the collection, to address their continued prevalence in  Shakespeare studies and museums today.

Article, "Founding Fathers: Patriotic Ceramics and Shakespeare in the United States" in Borrowers and Lenders: The Journal of Shakespeare and Appropriation 13.1 http://www.borrowers.uga.edu/784449/show

Talk on the SBT's German collection to launch the online exhibtion, at the Shakespeare Centre, Stratford-upon-Avon, 16th April 2018.