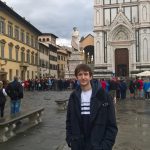 �A speaking picture�: the impact and influence of visual culture on the poetry and prose of Sir Philip Sidney (1554-86)

My research focuses on the Renaissance poet Sir Philip Sidney (1554-86), whose major works – such as the prose romance The Countess of Pembroke’s Arcadia, the sonnet sequence Astrophil and Stella and the poetic treatise The Defence of Poesy – shaped the world of Elizabethan literature. Sidney repeatedly draws comparisons between painting and poetry, connecting the visual culture of the early modern period with his writing. In The Defence of Poesy, Sidney defines poetry as ‘metaphorically, a speaking picture’. My thesis will investigate the question of why Sidney repeatedly emphasises these links between poetry and painting by drawing on current critical work from literary studies, art history and comparative literature.

I received a first-class honours degree in English Literature from the University of Birmingham, receiving the Tibbatts Memorial Prize as the final year student who achieved the highest overall score. I then received the Sir Stanley Wells Scholarship to study at the Shakespeare Institute, University of Birmingham, graduating with a distinction in the MA Shakespeare Studies.