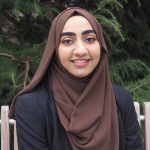 Beyond Britain: The Cross-Cultural Dragon in Medieval and Early Modern Arthurian Literature

My thesis explores the far-reaching literary and cultural influences, drawn from European and Arabic sources, which informed the development of the dragon as a cultural symbol in English Arthurian literature produced between the twelfth and sixteenth centuries. It traces literary-cultural transmission within and across medieval and early modern Arthurian works and considers wider political and sociocultural settings, in order to interrogate insular understandings of literary motifs.

- 2019: EMREM Annual Symposium, University of Birmingham. Paper given: 'Powerful Places and Stellar Skies: Medieval Britain and the astrological material of the Arab world'.

-Member of the Centre for Reformation and Early Modern Studies (CREMS)

-Member of the Network of Sisters in Academia (NeSA)

-Member of the Medieval and Early Modern Orients (MEMO)