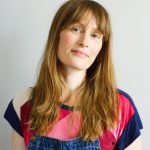 My Practice based Research (PbR) doctoral study will examine the experiential potential and impact of 360 video technologies in performance on the audience. It seeks to expand on my final Masters Project, a performance entitled Exposure, which combined dance choreography with 360 video (3DV) to create a unique spectator experience. In this project, I developed a theoretical framework, drawing on research from a range of visual arts fields, to inform my practical exploration. In doing so, I developed a methodology to investigate the way that 3DV redefines the relationship between performer and spectator, specifically in relation to intimacy and the hierarchy between the live and the mediated body. Building on these discoveries, I intend to create a body of original work that both challenges and extends the use of 3DV in choreographic practice. These performance experiences will be documented and analysed in relation to concepts and debates concerning this expanding field. There is a notable lack of scholarly research relating to the use of 3DV, specifically in performance, and on the impact these technologies are having on choreographic practices. This project aims to tackle this by providing both empirical and scholarly knowledge from a performance perspective.

There is a rich history of artist experimentation’s with the live and virtual body. Dixon (2007) traces the history of early virtual reality (VR) artworks, and there is a now a well-established body of literature exploring the potential of VR technologies within performance practices (Laurel; 1993, Dixon; 2007, Grau; 2003, deLahunta; 2002, Popat; 2016). The literature surrounding 3DV is slowly emerging and currently comprises several articles, although few relate to the use of this technology alongside live performance. Dixon suggests that whilst the possibilities for artistic use of VR are vast, uptake has not been widespread due primarily to time and cost. In 2002, deLahunta suggested that the uptake of VR by dance makers had been particularly stagnant. However, the recent growth of affordable 360 video cameras has begun to encourage choreographers to explore this medium, and digital art practices are emerging as a response to a fast-moving technological landscape. It is clear that digital practices are having a profound effect on the ways in which artists create work for audiences.

My research questions aim to:

-Explore the impact of using 3DV and digital techniques within live performance to challenge audiences’ corporeal and spatial perception.

– Extend understanding of how 3DV imagery and the VR mode of viewing alongside live performance, reconfigure notions of spectatorship.

– Develop ideas towards a theoretical framework that outlines 3DVs relationship to critical concepts on embodiment, agency, immersion, and intimacy.

– Determine how a live performance component may complicate notions of embodiment, agency, immersion, and intimacy within mixed reality work.

-Assess the impact and value of utilising 3DV in performance practices by offering new techniques and methodologies to the field of mixed reality performance.

My research will be underpinned by performance theories relating to embodiment including; Machon’s notion of (syn)aesthetic performance, Marks’ concept of haptic visuality and Kozel’s work on the interplay between performance, technology and phenomenology, and wider theories around intermediality and spectatorship.

Presentation on my work as part of Live Performance in Virtual Environments, Audiences of the Future Event, Nov 2020

Panellist for the Meet Up / Women in Tech event at Frequency Festival, Lincoln, 2019

Choreographer and performer for 36Q Blue Hour, a large scale digital immersive installation as part of the Prague Quadrennial of Performance Space and Design, Prague, 2019

Blind reviewer for for International Journal of Digital and Performing Arts, special edition on VR and Performance, 2018

Kerryn has been devising and choreographing work for the past fifteen years. She has recently created an innovative immersive digital performance and volumetric VR film Dis_place, which was presented at Broadway Media Centre and The People's Hall Nottingham, in October 2019. This project was supported by Studio Wayne McGregor's QuestLab programme, Dance4, NearNow and Arts Council England (ACE). She has received regular Arts Council England funding and has shown her work at a range of festivals, theatres and venues nationally including the National Review of Live Art, Sensitive Skin Festival, NEAT, NottDance and others.