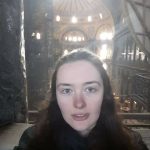 My research is a multidisciplinary investigation of early Byzantine burials, burial practice, and death belief. The current period covered by my research is 4th-7th centuries, although this will ultimately be determined according to the geographical location and date of the sites covered, some of which were used before and/or after this period. The research covers burials of various socio-economic classes, to consider burial practices not only at an elite level, but also the burial practices of understudied non-elite communities of the early Byzantine period.

New Approaches the Medieval Romance from the Eastern Mediterranean and Beyond c. 1100-1500 Workshop, University of Birmingham 05/12/2019 - "Is he alive, the one who was killed by the magic art?": an episode of magic in Livistros and Rodamni

18th Annual Postgraduate Colloquium Centre for Byzantine, Ottoman and Modern Greek Studies, University of Birmingham 03/06/2017 - It’s a Kind of Magic: Accusations of Sorcery in the Court of Manuel I

SPBS - Society for the Promotion of Byzantine Studies