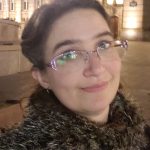 Death - The Uncertain Certainty: Changing definitions of medical death in Britain c. 1750 to 1850

Researching the definitions of death as put forward by four doctors, during late eighteenth-century England, based on the understanding of anatomy and physiology from the time.

Salomone, Nicole. When the "Dead" Rose in Britain: Premature Burial and the Misdiagnosis of Death During the Enlightenment. Jefferson: McFarland & Co, 2022.

"What Doesn't Kill You May Cure You." Medical History Society of New Jersey. Princeton, NJ.  September 2011.

"Popular Medicine and Remedies of Infectious Disease in London /US Colonies 1600 – 1800." Philadelphia Area Center for the History of Science (PACHS). Philadelphia, PA.  September 2012.

"What Doesn't Kill You May Cure You." Medical History Society of New Jersey. Princeton, NJ.  September 2011.

Stories Behind the Stones
2018 - 2022
Created, uploaded content, and ran online archive featuring graves and tombstone art from around the world, including biographical information about the people who had been buried.  Archive was on Omeka platform, which uses Dublin Core.  Now available for viewing through the Internet Archive's Way Back Machine.
Website: storiesbehindthestones.omeka.net