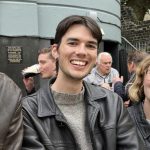 My PhD research seeks to apprehend two things: aural experience and the practice of listening in midcentury Britain, and the influence of this activity on the novel. The heightened sonic environment of the Second World War – air raid sirens, blackouts, ‘listening in’ to the radio and radio propaganda, constant reminders that ‘careless talk costs lives’ – produced a new cultural awareness of sound and listening in midcentury Britain. For many novelists, such as Henry Green, Elizabeth Bowen, Patrick Hamilton, Ivy Compton-Burnett and Muriel Spark, this translates into an aesthetic preoccupation with sound and its often-problematic relationship with prose (a mode of writing comparatively less ‘sounded’ than poetry or drama). For many novelists, this attention to sound was compounded by their contact with the institutions of broadcasting, primarily the BBC, as many produced radio works as a kind of alternative military service. This new intellectual patronage system would persist into the postwar years, when the radio was both experimented with as an aesthetic medium and used as a forum for literary promotion and intellectual contestation. In light of this context, my project attempts to understand the ways in which writers used the aesthetics of sound to experiment with, and adapt, the novel form at a time when its status was called into question by contemporary debates about the legacies of modernism and the ongoing historical crises arising from the Second World War.

- History of the novel