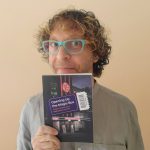 Thinking Outside the Magic Box: Reconsidering the Work and Inventions of William Friese Greene and their Contribution to Early British Cinema History

William Friese-Greene (1855-1921) was a working-class moving image pioneer who invented and demonstrated a series of motion picture cameras in 1889-91, years before Edison in the USA or the Lumière brothers in France. He went on to develop early colour film systems. In 1951 he was immortalised in the film The Magic Box. Over the following decade, film scholar Brian Coe published articles attacking Friese-Greene’s reputation. Since then, Coe’s limited research methods and sweeping conclusions have remained unchallenged.

Friese-Greene is among the most under-researched, undervalued figures in the history of British cinema. It is astonishing that someone who was prominent and influential has been dismissed without any form of re-assessment for over sixty years. This makes him the perfect subject for modelling a new approach to early film and technological history.

The PhD will investigate:
How did the work of William Friese-Greene directly and indirectly impact the development of cinema in Britain and beyond?
Now the nationalism and technological determinism underpinning previous histories have faded, what do primary sources reveal about the landscape of invention in which Friese-Greene moved?
How can a fusion of paper research and film practice expand our understanding of the birth of motion pictures?

My principal professional experience is as a director who has worked in feature films and television, with a wide range of skills I have taught to MA level. I believe that a film practice approach is integral to understanding the first motion picture technology, alongside wide-ranging research into primary written sources.

There are three ways film practice will be employed:
i) Utilising expertly-engineered, accurate replicas of the first Friese-Greene cameras, from the Race To Cinema project, I will undertake filming in close to 1890 conditions to get a clearer picture of what Friese-Greene really achieved.
ii) Digitally reconstructing early films from Friese-Greene and other pioneers, which have only ever been scrutinised as still images.
iii) Documenting the process of this recreation/reconstruction work in a film.

Thus, film practice is integrated into an interdisciplinary approach which brings biographical, technological, legal, historical and historiographical research together with the investigation of surviving artefacts, to transform our understanding.

This strategy impacts not just the Friese-Greene story but the work of other key international moving image pioneers who were active 1880-1895. In an instant, digital world, their extraordinary mechanical creations have acquired a mystery and magic that captures the public imagination. The ambition here is to create a template which can be applied beyond cinema to re-evaluate and better understand a broad scope of areas within the history of technology.

Essay 'William Friese-Greene and Me' in, Melanie Kelly (ed.), Opening Up The Magic Box: Friese-Greene and Reflections on Film, (Bristol: Bristol Ideas, 2021) PDF downloadable from https://www.bristolideas.co.uk/wp-content/uploads/2021/10/Film2021-Opening-Up-the-Magic-Box-200pp-A5-SOFT.pdf

Blog
Author of the blog William Friese-Greene & Me at https://friesegreene.com/ (Dec 2017 to present) which presents original research on early film history for a broad readership. In Feedspot’s Top 20 Silent Movie Blogs and Websites to Follow in 2019, 2020 & 2021.

DOMITOR - The International Society for the Study of Early Cinema