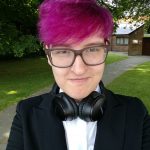 Gender-nonconformity and the quest for 'recognition' in the United Kingdom, from the 1970s to the present day

My project explores the role of ‘recognition’ in the history of the transgender rights movement in the United Kingdom. Using a mix of archival, oral, and internet research techniques, it asks how the concept of recognition of gender identities became the central issue in transgender politics around the turn of the twenty-first century, culminating in the Gender Recognition Act (GRA) of 2004. It also examines how the boundaries and implications of ‘recognition’ have shifted via the trans rights movement’s interactions/conflicts with wider human rights and feminist discourses.

Nautical Archaeological Society, November 2018, 'Building a Future for our Maritime Past'.

I have extensive experience in the heritage sector, having written two guidebooks for major heritage projects and organized numerous public events, including a talk by Christine Burns MBE for LGBT+ History Month 2018 in Cambridge, and an art exhibition in Harwich, Essex in 2018 in collaboration with the Imperial War Museum. My focus has been on helping economically and socially marginalised communities connect with, understand, and commemorate their history.

My primary research interest is the construction, communication, and negotiation of identities on society's margins, be they economic, social, cultural, or geographic. This led to my prior research on the construction of a politically acceptable gay identity in 1950s Britain, my published research on the uses of maritime heritage in the economically marginalized city of Newport, South Wales, and my current project on the trans rights movement in the UK.