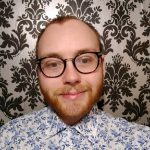 Examining the use and reception of the Song of Songs in Franz Rosenzweig?s The Star of Redemption

My current project, supported by the Midlands4Cities funding partnership and working with Professor Agata Bielik-Robson and Dr. Cat Quine, focuses on Hebrew Bible Interpretation and Reception, and its intersections with Jewish Theology and Philosophy, primarily in the works of Franz Rosenzweig. Focusing on the Song of Songs, which heavily inspired Rosenzweig’s own theology and philosophy, my research will explore how the text has been interpreted by various groups: from the ‘original’ audience (as close as one can speculate), to Early Rabbinic, Early and Late Medieval Jewish Mystics, before culminating in a detailed analysis of how Rosenzweig was influenced, or deviated from, these prior interpretations.

As a result of this research, I hope to highlight the uniqueness of Rosenzweig’s theology and philosophy due to his engagement with the Song of Songs, as well as how his engagements with translation and interpretations of Hebrew Bible texts influenced his relationship with scripture, theology, and philosophy.

Current and Prior Research Interests

Women in the Hebrew Bible