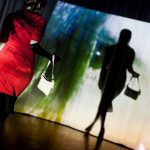 In Her Prime, or Past It?: Reconsidering the Gaze and Feminine Monstrosity in Feminist PerformanceArt and Film Studies.

This practice-based PhD uses interdisciplinary approaches to investigate the agency-filled potential of
femininity and masquerade. It takes as its starting point Mulvey’s ‘Visual Pleasure and Narrative
Cinema’ (1975) that transformed the way that we viewed the female image on screen and the position
of the masculinised spectator. Many criticisms have since emerged, highlighting how Mulvey fails to
consider the female spectator, prioritises the heterosexual gaze, and ignores other potentials of
looking (Doane 1982; Kaplan 1982; Mayne 1991). Working in dialogue with recent reconsiderations of
Mulvey’s theory of the male gaze, including those on the queer gaze (Wray 2012), I will apply them to the
work of contemporary female artists, such as the newest photo series by Cindy Sherman, Lois
Weaver’s performances exploring age and sexuality, and the recently rediscovered work of 1970s sex
positive feminist artist, Penny Slinger. Significantly developing upon this practice, I will produce original
intermedial investigations of femininity, displaying hyper femme personas that challenge the often
reductive positioning of the starlet and the ageing actress.