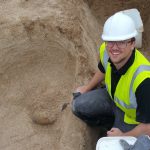 The British Iron Age is known for its hillforts. Grouped within these is currently a relatively under researched sub-category known as ‘marsh-forts’, defined by their setting in wetland environments. This has derived from the descriptive way in which we distinguish other categories of hillfort, such as promontory or contour forts. My research focuses on moving from such descriptive definitions of marsh-forts to analytical categorisations based on the relationships between site and landscape architecture.

My GIS-based MA research focused on the analysis of seven marsh-fort sites, resulting in the hypothesis that there are two distinctive types of marsh-fort defined by relationships between constructed architecture and wetland context.

To test this hypothesis, I will be expanding my MA research to all identified examples, and undertaking targeted fieldwork of a selection. The data collection stage of my research can be split into three main phases:

The data will then be used to determine and re-classify different types of ‘marsh-fort’ and assess how these relate to wider themes of Iron Age landscape architecture.

This project has potential to significantly impact on future study of hill-forts and the Iron Age. A more nuanced approach, built upon critical assessment, has the potential to redefine the classification of marsh-forts, exposing complexity and generating new avenues of research.

I graduated in 2017 with a First in BA Ancient History and Archaeology (Hons) from the University of Birmingham. My research interests focused on Iron Age settlements and society, and their relationship with the expanding Roman world in the later Iron Age. This led to my undergraduate dissertation on the subject of oppida and urbanism, supervised by Dr. D. Maschek.

I completed my MA degree in Archaeology, also at the University of Birmingham, graduating with Distinction in 2018. My research led me to a more niche category of Iron Age site in Britain: 'marsh-forts', which culminated in my Master's thesis on the subject of these (supervised by Prof. H. Chapman), investigating their morphology, location and function to assess how distinct they are as a type of site. This subject is then the focus of my continued research.

Following a recent break from academic study, working as a Field Archaeologist for Headland Archaeology, I have now returned to the University of Birmingham to complete a PhD focused on Iron Age marshforts (supervised by Prof. H. Chapman and Dr. David Smith; funded by M4C).

Across my academic and professional career, I have taken part in several significant projects including the Stonehenge Landscape Project and the archaeological works for HS2.