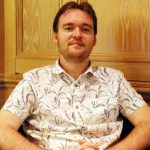 Thomas Middleton and the Adaptation of Shakespeare: Late Jacobean Politics in Print and Performance, 1616-1623.

My primary research interest relates to the plays produced for the London theatre industry during the English reign of King James VI and I (1603-1625), with a particular focus on the intersection between these plays and contemporary social and political issues.

Other research interests include:

Teaching and Other Institutional Positions